Top 10 Most Popular Programming Languages in 2021 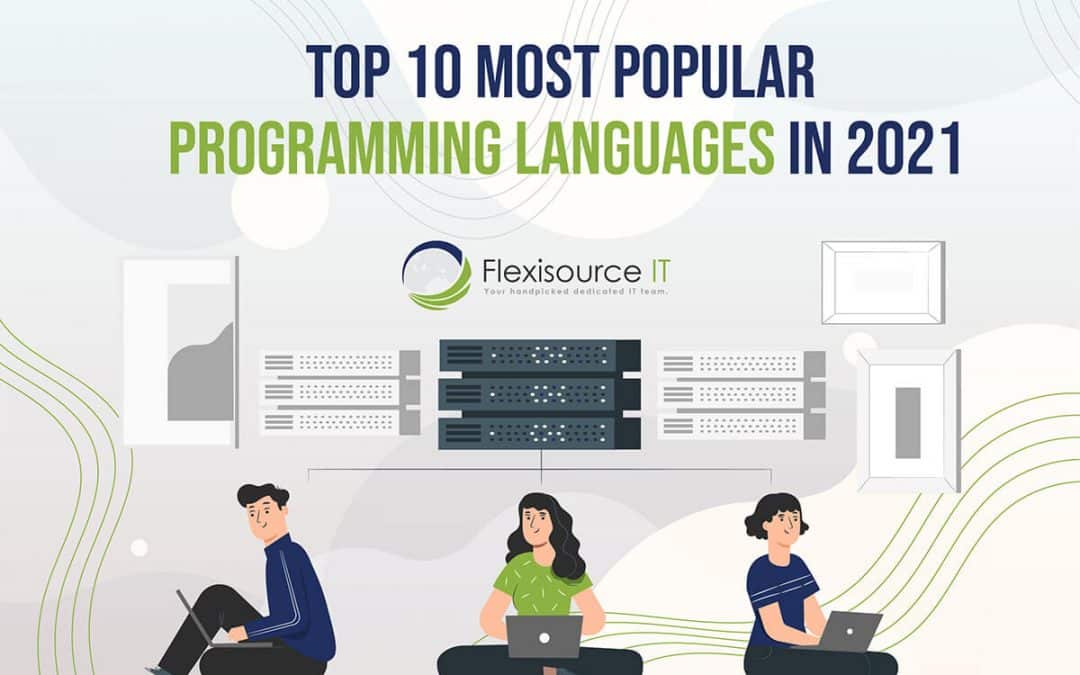 The rise of the need to develop applications and technology has changed the career scheme of the world. Today, there is no denying that software development is the most popular career choice. According to Linkedin, Software Engineer is the most in-demand role with the most LinkedIn Job posts in 2021.

However, not all software development jobs are the same. It varies per role, company, practices, and the type of application you are developing. But most importantly, knowing and understanding different programming languages is essential to effectively create a program.

Learning a programming language can be a daunting and confusing task, especially for professionals without prior experience. Choosing where to start first can be a frightening decision. The Tiobe Index helps us by creating a list of the top programming languages in 2021.

10 Most Popular Programming languages in 2021

According to Tiobe Index 2021, C language surpasses Python with only 0.16% to the number 1 position this month. Python has never been close to number 1, which could be a new milestone in the history of the TIOBE Index.

Let’s check out the list of top programming languages 2021:

C programming is a general-purpose computer language that was developed in 1972 by Dennis M. Ritchie. It was initially created at the Bell Telephone Laboratories to develop the UNIX operating system. C is widely used as a computer programming language for scripting system applications for hardware, drivers, kennels, and Windows operating systems, UNIX, and Linux.

Benefits of C Programming: Like Python, Java, and PHP, C is a good starter for learning how to program. It’s easy to understand and simple to use. It’s portable, easy to debug, write and execute. It’s also open-source and free. C also served as an excellent foundation for writing programming languages. In fact, some of the modern languages like PHP, Python, and Ruby are developed through C.

Drawbacks: Since C is an older programming language, developing more modern applications and websites is inappropriate. C doesn’t have any object-oriented functionalities and has a more complex syntax.

Average annual salary: The average salary of a PHP developer in Australia is AU$ 80,187 per year, according to PayScale.

Python is a high-level and object-oriented programming language that is readable with dynamic semantics. This language is perfect for Rapid Application Development and scripting or glue language due to the high-level built-in data structure, together with dynamic binding and typing.

If you are wondering why Python is so popular with developers these days, here are some additional details on the programming language:

Benefits: Python is regarded as a language that is easy to learn due to its simple syntax. It’s also free and open-source and has several resources, libraries, and toolkits available. Moreover, it’s highly portable and can easily be integrated with other popular languages like C++ and C without changing the code.

Drawbacks: Since it’s a dynamically typed language, code execution can often lead to slow speed. In addition, Python is not great for Mobile Computing and Mobile app development.

Average annual salary: According to AUTalent, the average salary of a Python developer in Australia is $ 135,000 per year.

Benefits: Living to its reputation as the third popular programming language 2021, Java has a simple, clean, and easy-to-understand syntax. The language is object-oriented, making it flexible to be enhanced and reused in other programs. In addition, it’s also platform-independent, making it able to run on any platform that supports Java. As such, Java is referred to as WORA language or “write once, run anywhere.”

Drawbacks of Java programming: Like other programming languages, Java also has its weakness. Java is memory-consuming and, therefore, slower than native languages. The code also needs to be interpreted to the machine-level code. In addition, it also does not have a backup facility. Moreover, Java is not ideal for the application that runs on the cloud, well known in today’s business applications.

Average annual salary: According to Indeed Australia, the average salary of a Java developer in Australia is $ 123,584 per year.

C++ is a general-purpose and cross-platform programming language that is used to develop high-quality software. It was developed by Bjarne Stroustrup in the 1980s as an extension to the C language. C++ is a generic and functional programming language that uses low-level memory to enhance performance, flexibility, and efficiency. It is also used to develop games like StarCraft, World of Warcraft, and other gaming consoles.

Benefits: C++ works well with multi-platform and multi-device systems. It’s highly portable, and developers can develop codes without thinking of the platform it needs to be run. C++ features the OOP concept, something that C does not have. You can also use C++ to make GUIs, as well as games.

Drawbacks: Although C++’s syntax is like other programming languages, it is still complex and is best used by experienced developers. Pointers is also a challenging concept in C++. It does not support run-time checking, making it difficult to detect errors and defects. Thus, debugging pointer bugs is very difficult.

Common Use of C++ programming language: Operating Systems or Drives that interface with hardware, robotics, automobiles, and appliances

Average annual salary: According to PayScale, the average salary of a PHP developer in Australia is AUD$ 81,347 per year.

C# is a general-purpose and object-oriented programming language that was developed by Microsoft. It aims to combine the computing power of C++, ease of Visual Basic, and features of Java. The language encompasses strong typing, static typing, and component-oriented programming disciplines. C# is widely used in creating large-scale applications of Microsoft and game development in unity.

Benefits: C# was developed by Microsoft as a faster and more secure alternative to C. This language features an extensive code library, shared codebases, and a range of data types. In addition, it is entirely incorporated with the Microsoft .Net framework, which supports the development of programs for windows and plugins for both web browsers and mobile devices.

Drawbacks: However, C# has a steep learning curve, especially fixing bugs or resolving issues. It is also less flexible than other languages. Lastly, C# is an internal part of the .Net framework; thus, the platform running the app must be windows based.

Average annual salary: According to Payscale, the average salary of a C# developer in Australia is AU$ 70,469 per year.

Visual Basic (VB) is a computer programming language developed by Microsoft. It’s event-driven and provides a graphical user interface (GUI) that enables coders to modify code using drop and drag features. The last version of VA was released in 1998. However, it was replaced by VB .NET, Visual Basic for Application, and Visual Studio.Net.

Benefits of Visual Basic: VB is easy to learn and fast to write code. It is sometimes called a Rapid Application Development (RAD) system. It is used to create a prototype of an application written in a more difficult but better language.

Drawbacks: Despite being powerful, it is not really suited for programming. It is slower and is written by Microsoft. The program written in this code cannot easily be transferred to other operating systems.

Average annual salary: According to PayScale, the average salary of a Visual Basic developer in Australia is AUD$ 100,000 per year.

JavaScript is a text-based programming language created in 1995 by Brendan Eich. The language is commonly used on the client-side and server-side to create interactive effects within the web page. It is a high-level and multiple paradigms with dynamic typing, curly bracket syntax, and first-class functions.

Benefits: According to Statista, JavaScript will be the most used programming language in 2021 due to its number of advantages. Apps developed using JavaScript have shown exemplary performance and speed. JavaScript is very fast, and programs can run immediately within the client-side or user browser. It’s also simple to learn and implement. And due to it being developed as a “glue language,” JavaScript is great with other programming languages. It can be used in a variety of applications.

Drawbacks: However, JavaScript is not that scalable for large projects. Still, typescript is available for this purpose. In addition, since most data is stored on the client-side, security is a considerable risk for pop-up ads and other malicious content.

Assembly language is a low-level programming language primarily used for direct hardware manipulation, device drivers, real-time systems, and embedded systems. Assembly Language codes are converted into executable machine code by a utility program called an assembler. It is exactly like a machine code that a computer can understand, but written numbers.

Benefits of Assembly Programming Language: Assembly Language helps developers to write human-readable code that is similar to machine language. It allows a complex project to develop in a more straightforward method and run effectively. It’s fast and memory-efficient, despite being used to critical jobs and hardware-oriented developments.

Drawbacks: Since it’s hardware-oriented, the program lacks portability like other computer languages. Its syntax is also challenging to remember and understand, taking time and effort when writing codes.

Average annual salary: According to Glassdoor, the average salary of an Assembly Programmer in the United States is $ 89,736 per year.

PHP, or Hypertext Preprocessor, is a general-purpose scripting language created in 1994 by Rasmus Lerdorf. The language develops dynamic and interactive websites and manages databases, session tracking, and builds eCommerce websites.

Benefits: PHP is widely known for having a low learning curve. As an older language, its community is vast. It has produced many open-source frameworks, libraries, and tools to make the language easier to use. There are also a lot of resources available online for developers who want to learn PHP. In addition, PHP code is also easy to debug.

Drawbacks: This language is always compared to other languages like Python vs. PHP due to its flaws. PHP is known for its security vulnerabilities. Likewise, it’s also not scalable, and the code is harder to manage as it grows.

Average annual salary: According to AU Talent, the average salary of a PHP developer in Australia is AUD$ 100,000 per year.

SQL or Structured Query Language is a programming language used to communicate with relational databases. It is used to store, extract, and organize data stored and facilitates users to retrieve specific information and create, read, update, and delete tables, rows, and columns.

Benefits: Despite being a programming language, data retrieval using SQL does not require a large number of code lines. All essential keywords like INSERT INTO, UPDATE, & SELECT are used, and syntax is not complex. It’s easy to learn, understand, and execute.

Drawbacks: Despite not requiring coding skills, the SQL database interface is a bit complex. In addition, some features are not free. Hence some cannot access it.

Average annual salary: According to AU Talent, the average salary of a SQL developer in Australia is AUD$ 103,547 per year.

And that concludes the TIOBE’s Top Programming Languages 2021. 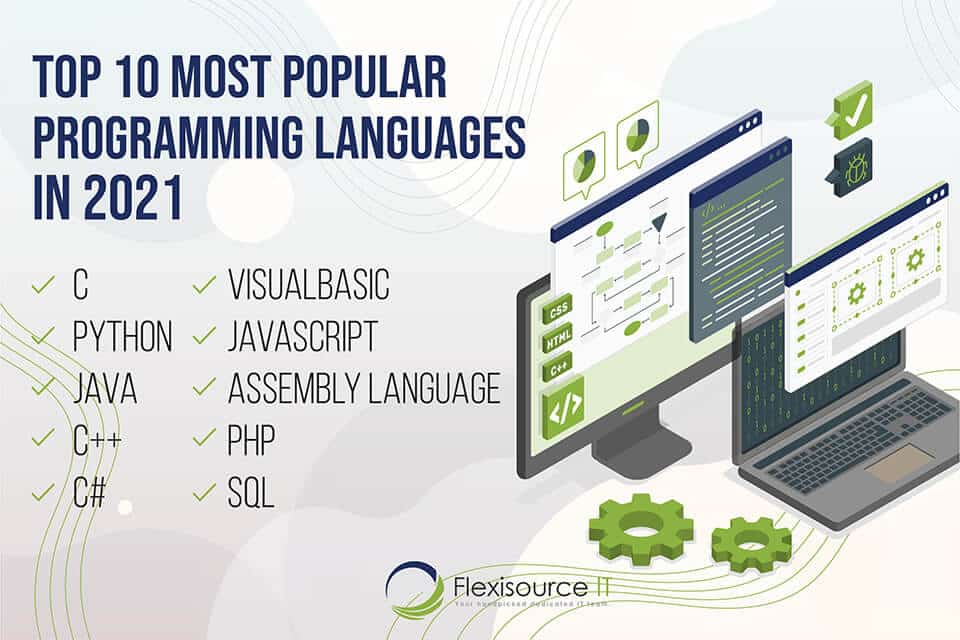 If you are looking to hire a full-stack developer with expertise into the top programming languages 2021,  Flexisource IT offers a fully dedicated team of IT experts and agile professionals for your needs. Contact us today.