Why Python? 7 Reasons Why Python is Popular with Developers 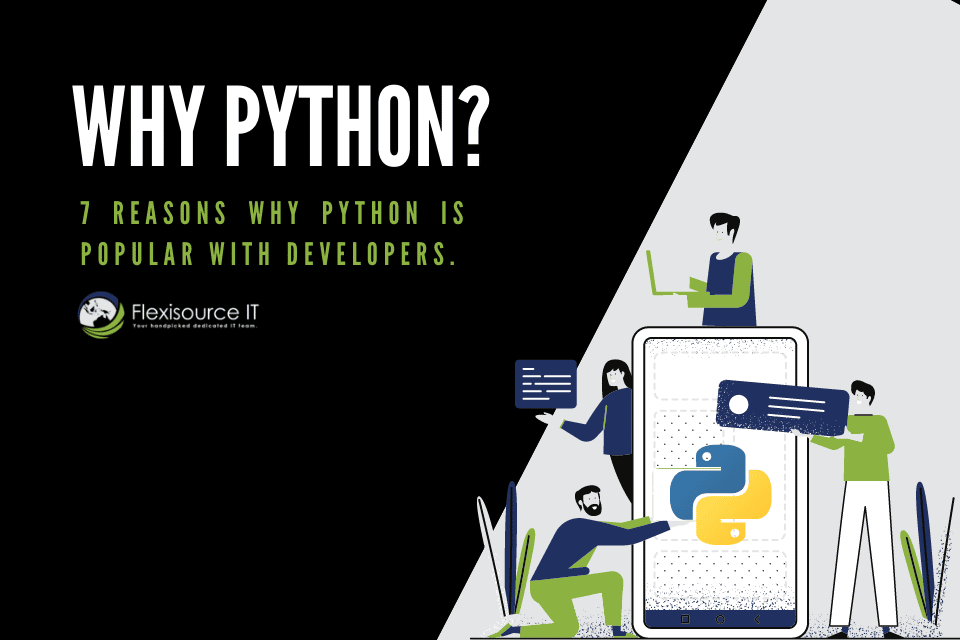 In recent years, Python has become one of the fastest developing and most popular programming languages globally. It is widely used in everything – from building websites to making AIs and learning machines. Many developers find it scalable, versatile, and easy to use.

However, not all are convinced of its credibility. Many believe that Python does not deserve the popularity it gained, and there are far better programming languages than Python. Although this might be true, let’s look into the detail of what Python can do. Let us discuss the definitions, benefits, and uses of python.

Before we get into the benefits of Python, it’s first essential to know its history and meaning.

Guido van Rossum created Python in 1989 as a successor to ABC language. The idea was formed when Rossum started developing a new language that includes all the best features of the ABC language while adding new features like extensibility and exception handling.

Python 1.0 was released in 1994, having the capability to interact with Amoeba operating system and includes other programming tools. Later in October 2000, Python 2.0 was released with more improvements, including Unicode and garbage collector support. In 2008, Python 3.0 was released, possessing a new design to avoid duplicate constructs and modules.

By nature, Python is a high-level programming language that developers can use in creating both simple and complex operations. Python also has many inbuilt features and a wide array of modules and libraries, supporting many other programming languages like Java, C++, and JSON.

Today, Python is used in varied programs and automated tasks. This language is often used to develop websites, software, task automation, and more. It is also used in data-related tasks such as data analysis, data science, machine learning, and AI.

Unlike other programming languages, Python is beginner-friendly and easy to use. Its syntax is simple and closely resembles English. The programming language also incorporates more minor codes. For example, a seven lines code in the C++ language only requires three lines in Python. Programmers appreciate this feature as the reworks or corrections will take lesser time.

Python also enforces the “whitespace rule,” making it cleaner code and less overwhelming to the eye.  As such, Python can easily be understood, written, and executed due to its ease of learning and usage.

Python is an open-source language which means you can download Python for free. Using Python doesn’t require any subscriptions or use a custom-built platform either. You just need to install the Python Program on your desktop or laptop and start writing codes within a minute.

Python also has an active community, thanks to the best experts contributing to the language and forums. All necessary tools for Python, including support, modules, and libraries, are free.

Python has excellent and free libraries that developers can save time and effort on every development cycle, thanks to its wonderful community. There are tons of frameworks and libraries available online for free for Python, such as Django, NumPy matplotib, and more.

If this is not enough, cloud media services also offer cross-platform support through library-like tools.

Python was created to help programmers write logical and cleaner code – from small-scale programs to large-scale projects. This simplicity characteristic of Python provides developers a space to adapt and changes to different paradigms as necessary or as they prefer.

Living to its reputation of being flexible, Python supports various operating systems and architectures. Python code can be run on multiple platforms, including Windows, Linux, macOS, etc.

In addition, Python is an interpreted programming language. Its source code is converted into bytecode and platform-independent. This is one of the advantages of Python over C, C++, or Java.  Python code is executed line-by-line by the program and not interpreted into machine-targeted instructions. Comparing Python vs Java, C, and C++, we cannot use the compiled program from Linux to Windows and expect it to run successfully.

In addition, it is easier to make alterations in the code and modify it for another platform. It will be easier to see the impact of changes quickly. It makes Python appropriate for ad-hoc appeals without the chances of increased development time.

As one of the top-used programming languages, Python has undoubtedly had a future in technology. Python developers are one of the most paid developer professions in Australia. According to talent.com, a python developer’s average salary in 2021 is $135,000 annually. The most experienced Python experts also make up to $215k per year.

In addition, the demand for python developers and programmers is growing faster.  According to LinkedIn, about 18,000 Python Jobs are available in Australia, with more being added daily.

Any python developer will agree that Python is efficient, reliable, and faster than most modern programming languages. Python can nearly be used in any product and not face any kind of issue or performance loss. As mentioned earlier, the language is used in various environments such as mobile applications, desktop programs, web development, data science, and more.

Where is Python best used for?

Python, today, is one of the most-used programming languages across the world. You will find the most prominent corporations like Google, Netflix, and even NASA using Python to power their services and company. 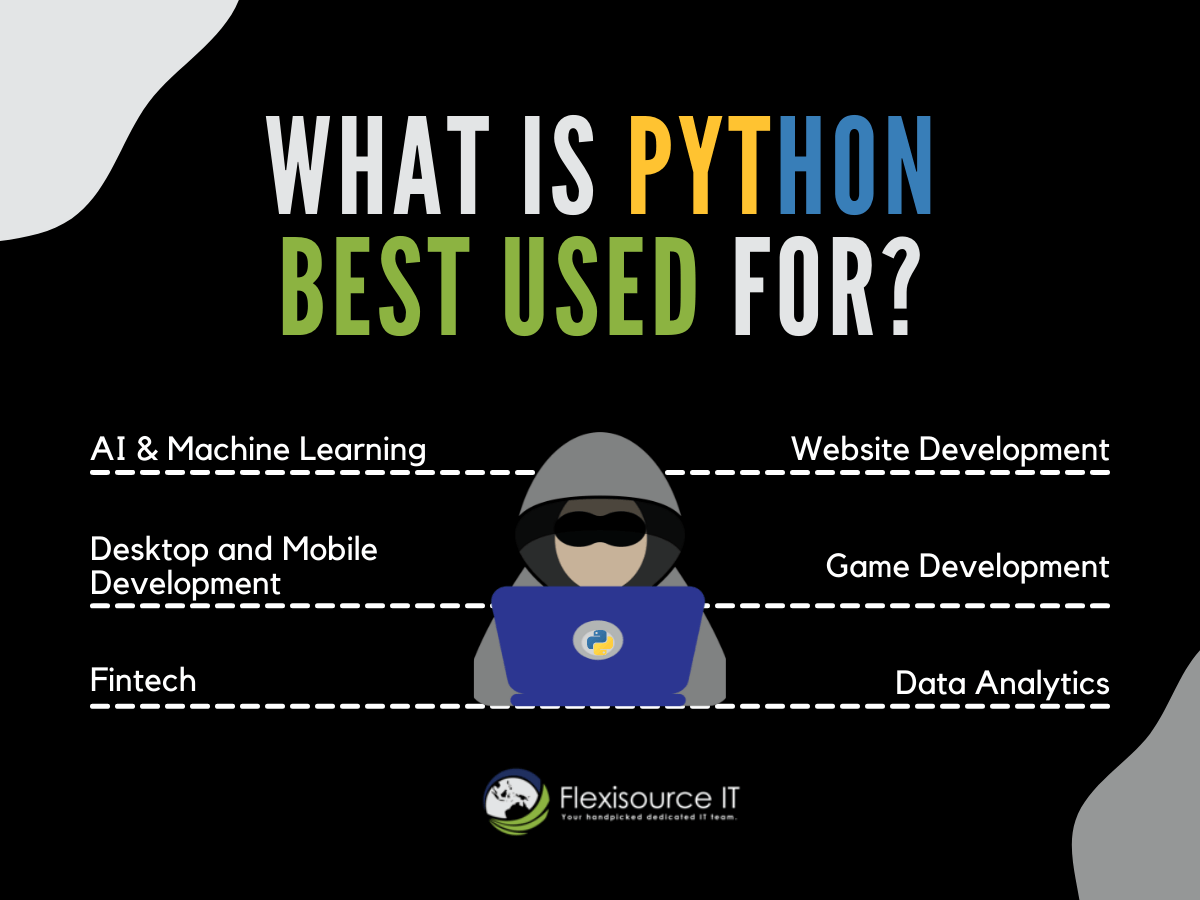 The programming language is used not just for web development but also data analytics, machine learning, and even game development. As such, here are what python is used for the most.

If you are wondering Due to its flexibility and capability, Python is popular and widely used in machine learning (ML) and artificial intelligence (AI). The programming language offers concise and readable code. Data Scientists find Python’s simplicity reliable when writing a code. It lets them focus more on the complexity of the data and algorithms rather than concentrating on the technicality of the language.

In addition, developers believe that Python is insightful more than other programming languages. Due to its available frameworks and extensions are suitable for collaborative implementation when handled by multiple developers.

Like ML and AI, Python is great for data science and analytics. As the world shifts its focus to a data-oriented world, many analysts find themselves dealing with tons of data that needs to be interpreted and understood. There is a need for a system to collect, manipulate, and organize all information.

Python for data analytics and science is excellent. The language is tailor-fit for situations such as integrating web apps or statistical code into the production database. In addition, Python is also a perfect fit for implementing an algorithm that is usually necessary when analyzing data.

Python is used to develop the back end of a website or application. The back end is functions that users generally do not see but is essential for a program or website to function. Python’s web or application development role includes data processing, data communication, security, and URL routing.

The most common Python Framework used in this is Django and Flask.

Despite popular belief, Python can also be used in Game Development. Popular games such as Eve Online and Pirates of the Caribbean were developed using Python. In addition, PyGame is a Python dedicated library that is easy to use for building games. This framework has pretty much had everything needed to create simple 2D and retro games.

Python makes the perfect candidate programming language in handling financial services applications due to its easiness of writing and deployment. Python’s simple syntax and development speed make it easier for the organization to build software to handle their customers and market.

They are likewise used in data science that handles complex numbers and data. Its versatility reduces any potential error rate critical when handling heavily regulated industry and data like finance.

To sum up, Python gives a lot of advantages when it comes to development. Python is famous for several reasons. Despite having several issues like speed or runtime, the language is generally excellent and easy to learn. In addition, it is straightforward to use and versatile, as mentioned above. There are several good reasons to learn and use Python when developing new products. Its popularity speaks for itself.

If you are interested in developing a product using Python, Flexisource IT can help you with that! We provide the best IT service solution from the Philippines to Australia and New Zealand. Visit our IT services to learn more.