What is a Legacy System, and Why Does it Still Exist? As we head farther to the 21st century, technological advancement and digital transformation are becoming more and more relevant. A lot of companies worldwide have incorporated this concept in their company. With the heightening of the COVID-19 pandemic, digital advancement was forced to be adopted by businesses to fill in the need and changing preferences of consumers. According to BCG, 80% of corporations in Australia are embarking on digital transformation.

In this tech era, an organization still using legacy systems might be seen as underperforming and struggling to be relevant. If your company is still using a legacy system, then the thoughts of modernizing your system might have crossed your mind. You might have wanted to upgrade it using the most popular programming languages.

What are legacy systems?

The legacy system has no clear definition. Technically, many technologies like composer systems, software applications, processes, and programming languages can be categorized as legacy systems. However, in IT, this term can negatively affect technologies such as outdated, underperforming, and old. Likewise, some of the characteristics of a legacy system can be described as:

In summary, a legacy system can be any technology that can no longer be updated or supported. It does not have to be a decade old for a system to be considered a legacy. Even a year-old system can be one, as long as no one uses or supports it.

Why are legacy systems still used?

In this era of technology, many establishments are now adapting to modern systems to meet their business objectives. However, for some, it tends to stick around despite the disadvantages of legacy systems.

Often, companies now want to replace assets that are not broken. In addition, some companies heavily depend on this system and could not risk downtime for it to be upgraded. Replacing something that they use every day could be risky and might cause a problem.

Aside from that, another reason is that most employees are already comfortable with the legacy system. Teaching these employees could take an adequate amount of time and could cause a delay in their outputs.

Likewise, businesses also tend to be reserved in upgrading their legacy system due to replacing it. Some companies cannot afford to switch to a newer version. Some of these expenses might include replaying recent hardware or components to accommodate the latest software.

Who still uses the legacy system?

As mentioned earlier, the legacy system tends to stick around due to its reliability and employee familiarity. Despite the potential risks and losses, several important sectors and industries still use legacy systems. Here are some examples of organizations that still use the legacy system.

In the United States, the Government Accountability Office reported in 2016 that three out of ten oldest systems use Common Business-Oriented Language (COBOL), one of the oldest programming languages. This language was developed by the Committee on Data Systems Languages (CODASYL) in the 1950s. It was used primarily by significant corporations and government organizations. And despite the predictions of numerous engineers, the classic computer languages are still around for decades.

Like many government agencies, the financial and banking sector was also reported to use COBOL as their primary programming system. However, like any programming language, COBOL has its own drawbacks and restrictions. Still, it’s perfect for a large organization that handles massive data processing like banks, leading agencies, and retailers.

However, according to Financial Times, most banks are not switching to the modern system due to the shortage of developers experienced in COBOL.

Like the financial sector, the background checking system used by the government and private sectors are run by legacy systems. However, most of these systems suffer from increased traffic and different data sources. As a result, the system crashes. However, the legacy system is typically too complex to migrate to newer technologies with all the data it handles.

What are examples of legacy systems?

There are numerous types of legacy systems that were developed and are still being used by organizations. Here are a few legacy systems examples that are still existing:

What are the dangers of keeping legacy software?

A lot of organizations are still having doubts about legacy systems vs. modern systems. And despite the frequent modernization of the system, many agencies are still using legacy systems due to the assurances and convenience it provides.

However, there are heaps of problems with the legacy system. It also has a tipping point that most advanced technologies do not face. 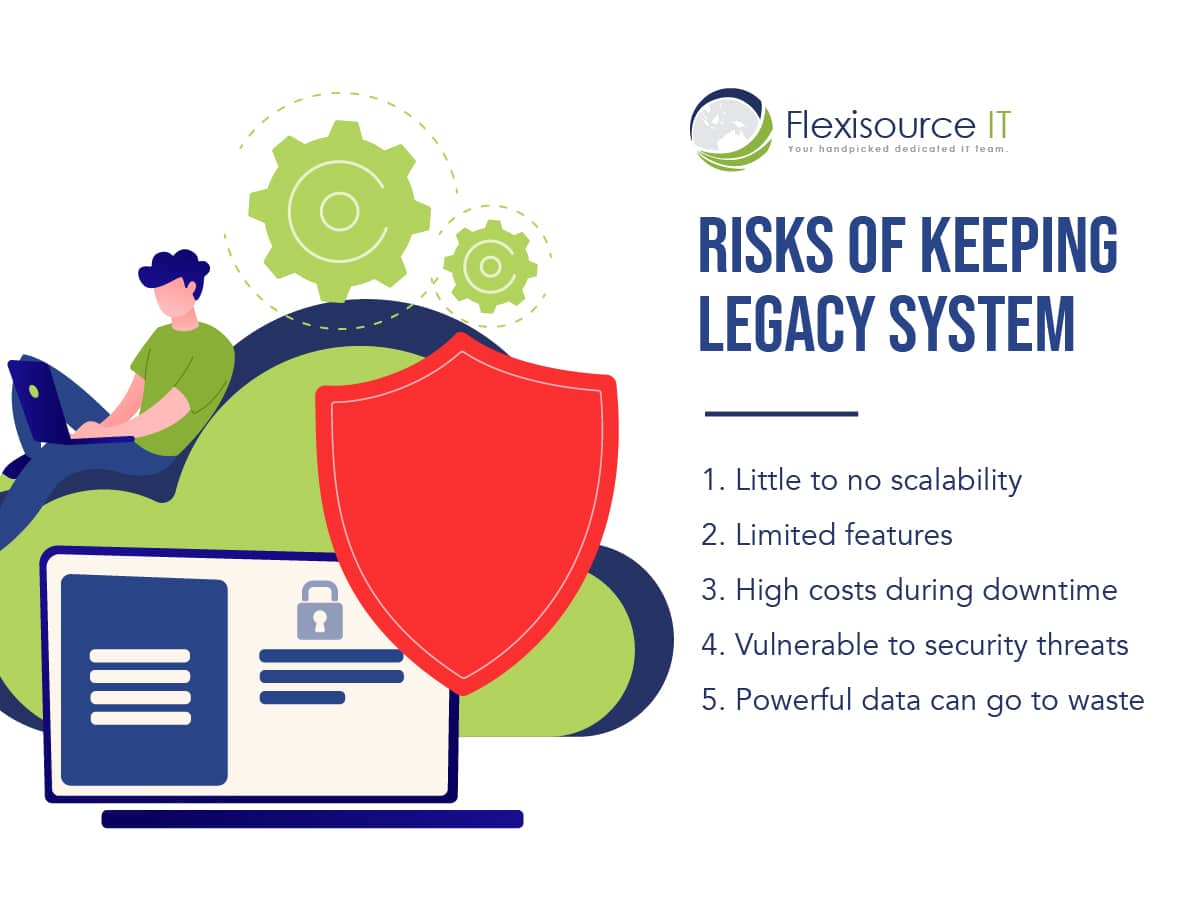 As such, here are five of the most common risks that legacy systems can bring to your company.

As such, a lot of cybercriminals target legacy systems for their vulnerability. Attackers can easily access applications, middleware, and databases running on the organization’s platform. In addition, some legacy systems do not support modern backup and recovery solutions, unlike current technology. Businesses that get hacked might face issues with their business continuity and operations.

Likewise, most government agencies set compliance standards and regulate systems on companies that handle sensitive data. Having a system that is not at par with standards may face expensive fees and penalties. In addition, this can also affect your business’s reputation and customer trust alone. Any news about your company using an unsecured system may affect your brand and sales.

Although many organizations hesitate to modernize their system due to its high cost, legacy technology maintenance can sometimes outweigh this investment. A lot of legacy applications often crash or face issues that need constant attention from the IT department. These issues are eating away company resources and employee time.

The constant repair can take away the IT department’s attention from doing more important projects. In fact, according to the Auditor-General’s Department of South Australia, the SA government spends more than $20 Million in addition to vendors to support the legacy system of the government.

Likewise, frequent downtime can also result in the workforce not doing their work. Departments that heavily rely on this system may suffer as they wait for it to operate again.

Another issue that legacy systems face is their incompatibility with modern technologies. Migrating data out of their legacy system may face incomplete extraction, splintered data, or duplicated input. Data may also exist in a variety of formats and storage.

In this era of technology and the digital age, all businesses face an accelerating need to modernize and change the way they sell their products or services. Many companies are being pushed to join the digital landscape and modern IT architecture in their operations or face the prospect of losing potential clients and sales.

However, legacy technologies cannot compete with these demands as most are incompatible with modern techs like cloud service, IoT, and big data.

If you are a young professional seeking an IT career, you will most likely take on one emerging IT career path. Since most legacy systems are considered outdated and obsolete, fewer IT professionals are learning how to handle legacy technologies.

Companies using legacy systems will likely face issues when looking for IT support or professionals to meet their system’s problems. In addition, due to the smaller pool of experts, fixing legacy systems is expensive.

Should you keep using the legacy system?

And that’s it! By now, you probably understand what legacy systems are and how they can affect your company. Before deciding to completely transform your system into a modern one, make sure to factor out your needs and advantages. If a modern system gives you a competitive edge, then do not hesitate to upgrade.

But if your business still needs to use a legacy system to support and store a lot of data, then make sure that your system is secured and well designed. So if you are looking for a company to help you with your legacy system maintenance and needs, Flexisource IT can help you! We offer Legacy IT services for organizations in Australia and New Zealand. Contact us now.